The Governing Council of the College is dedicated to the principles of strong corporate governance, combined with the highest ethical standards in all of its activities. Our reputation for honesty and integrity is reflected in the way we conduct our business. We are committed to acting immediately on any reported breaches of conduct. We fully expect and believe that all of our Councillors, Committee Members, Contract Investigation Officers, Employees, Contract Employees and Regulated Members share this commitment.

Through this protocol, the College aims to protect the integrity of our organization, and protect any individual(s) acting to support that aim by exposing any breach of conduct within the College. Because of the involvement of employees in the College’s operations, they are often in the best position to observe and report any abuse of trust. In keeping with the College’s commitment to accountability and transparency, this protocol provides protection for such “whistleblowers” by enabling safe disclosure, and prohibiting reprisals against them.

With this protocol, we seek to support an organizational environment where any individual(s) who observes or has knowledge of a possible abuse of authority, misrepresentation of information or misappropriation of assets in any form is empowered to identify, question and report such events. Employees are also encouraged to report circumstances that may put the organization at risk for such behaviour (e.g. lack of appropriate oversight mechanism; absence of checks and balances, etc.),

Any person who makes such a report, in good faith, or participates in an investigation, will be protected from any retribution or reprisal through this protocol.

The College’s Safe Disclosure - Whistleblower Protocol (“the Protocol”) is designed as a control to further safeguard the integrity of the College, including its financial reporting. The Protocol encourages and requires employees and members of Council to question and/or report concerns about the College’s integrity. This can be done through a number of channels on an anonymous and/or confidential basis, as outlined under “Reporting Procedures”.

This Protocol applies to all of our Councillors, Committee Members, Contract Investigation Officers, Employees and Contract Employees. The responsibility to question and/or report breaches of conduct, financial and/or reporting concerns, and the protections provided to those who do so, is a shared responsibility and right.

Employees and Councillors have a responsibility to question and/or report concerns about the integrity of conduct, financial reporting or any observed consequences of good faith reporting.

Concerns about the breaches of conduct may include: discrimination, harassment, abuse of authority, bullying, breach of trust, confidentiality, fiduciary duty.

Concerns about the integrity of financial reporting may include:

If any individual is uncertain that a wrongful act has occurred, or is concerned that the potential for such an act exists, they are encouraged to have a discussion with either their immediate supervisor, their supervisor’s supervisor, the Chief Operating Officer and Registrar or any member of the Senior Management Team in order to ask questions or seek any needed clarification. Should the concern remain, the individual is encouraged to file the concern in writing as outlined later in this protocol.

Concerns shall be reported in the following manner:

All persons involved in allegations of suspected wrongdoing are to be treated fairly and impartially regardless of their position or the length of their involvement with the College. All disclosures made under this protocol and all investigations will be handled in a confidential and sensitive manner. The details of individual(s) disclosures and the results of investigations will be disclosed, discussed or reported only to those parties who have a legitimate need to know.

The Safe Disclosure - Whistleblower Protocol is intended to encourage and enable individual(s) to raise questions or report serious concerns within the College, rather than seeking resolution outside the College. Accordingly, the College does not permit retaliation or harassment of any kind against any individual for complaints submitted that are made in good faith.

It is important to note that there may be consequences for reports made for reasons beyond what could be considered “good faith” (for example, if the individual is aware that the reported information is false, or is made with intent to harm another).

The Finance and Audit Committee will review the Protocol annually and bring forward suggested revisions to Council.

Fraud[1] means a criminal deception, the use of false representation to gain an unjust advantage

Misappropriation means take or use something, especially money, dishonestly, in order to use it for an improper or illegal purpose

Reprisal[2] means retaliatory actions or measures that could be taken against an Individual(s) reporting a Wrongdoing, including but not being limited to an Individual(s), may not be discharged, demoted, or otherwise discriminated against as a reprisal for disclosure made to the College Officers relating to a substantial financial violation (including the competition for or negotiation of a contract)

Whistleblower[3] means individual(s) who alleges misconduct in Whistleblowing. The Individual(s) must have reason to believe their employer has violated some financial law, rule or regulation

Whistleblowing[4] the disclosure of information, in a manner consistent with this protocol, concerning a financial act that a supervisor or an employee(s) has committed, is allowing to occur or is contemplating

Wrongdoing[5] departure from what is ethically acceptable and includes but is not limited to: 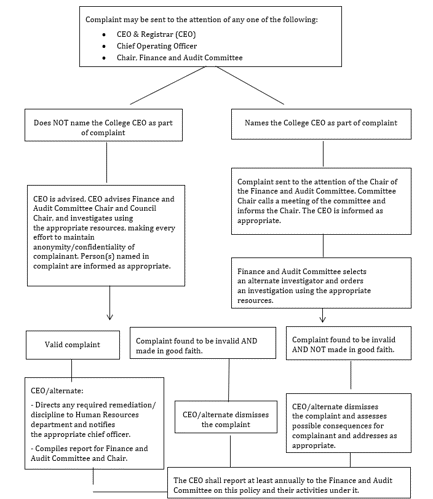